For our fourth of July vacation this year, we went to Germany. There were lots of sausages: in restaurants, beer halls, and even sold on the street.

In Munich, we went to beer halls. They pour huge beers (William and I usually shared the liter of beer) and serve large plates of very filling, heavy food (e.g. roasted pork shoulder, pork knuckles, sausage, and grilled mackerel “fish on a stick”).

We stayed one night in Rothenburg ob der Tauber (a well-preserved medieval town) and also made a quick stop in Nuremberg the next day.

Finally, we went to Berlin. Berlin has lots of graffiti and street art. There was a mix of old and new buildings and lots of repurposed warehouses decorated with street art.

In modern times, Germain people eat all sorts of cuisines on a regular basis. I suspect that many Germains eat traditional foods as often as Americans eat hot dogs or hamburgers, which is to say that it is probably only eaten on occasion, though some eat it more often than others. However on our trip, we mainly ate traditional Germain foods, since that is what we were most interested in. So we had lots of schnitzel, pork shoulder, bread dumplings, sauerkraut, sausages, simple green side salads with lots of vinegar, and spätzle.

A famous Berlin street food is currywurst, which is a sausage topped with a curry tomato sauce and fries. We tried some from Curry 36. 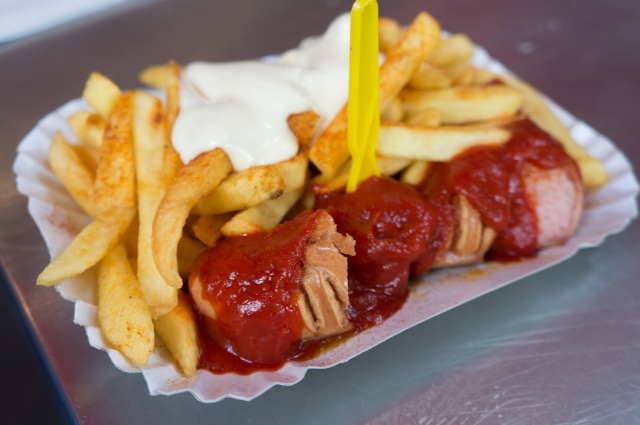 Berlin has a large Turkish population; doner kebab stands are all over the city. We had doner kebab at a few places (it ended up being one of my favorite foods), including Mustafa’s Gemüse Kebap. The line was very long; the doner kebab was good, but I’m not sure it was worth the long wait. 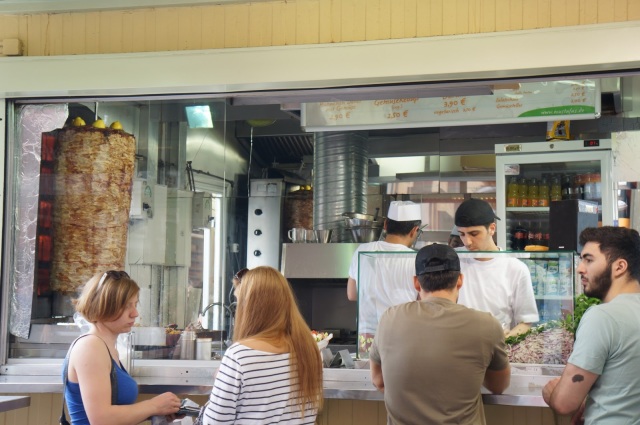 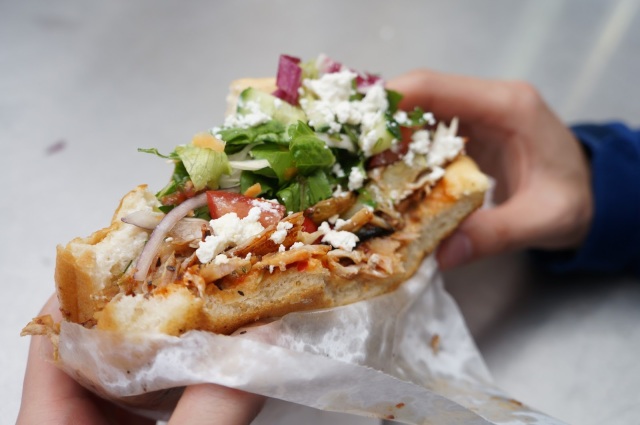 We also discovered the wine shop and cafe, Knaack Raum für Geschmack. It was past dinner time in the neighborhood we were walking around in, so many restaurants had closed, and this was one of the few places still open. It was a lucky find. The shop is also a wine importer, specializing in wines from South Tyrol (northern Italian province) and Georgia. I really enjoyed the pinot that we had there since it had a slightly mineral taste, had personality, and was distinctive. We also had some ravioli that I liked a lot. It had a pine nut filling and was dressed with a fruity olive oil and a grated cheese (perhaps pecorino or parmesan)–simple and perfect!

I had the red current tart from the coffee store, Five Elephant, since I had seen the cute berries in many farmer’s markets and was wondering what they tasted like (the picture of red currents was taken at the market in Munich). The coffee was good but the pastries were even better. The pastry was just barely sweet and the red current provided a nice sour note. The crust was especially good because it was very delicate. 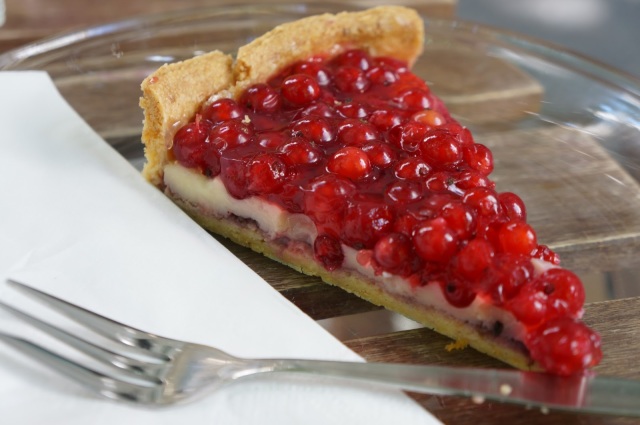 William had a blueberry tart from Five Elephant. I liked how they pressed a few oats into the sides of the crust.