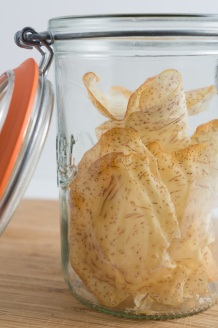 Taro chips uses the same technique as making potato chips and sweet potato chips, but there are a few additional details that should be pointed out.

Taro skin and the liquid it emits contains an irritant that makes some people itchy, so try not to touch it. If it bothers you, use a plastic bag or plastic gloves when handling it and wash your hands after handling raw taro. Taro must be eaten fully cooked; it is toxic when raw.

Taro skin should be peeled off before the taro is eaten; depending on the recipe the skin may be peeled when it is raw or after it is cooked. Discard the skin; taro skin is not eaten.

The Chinese variety of taro (also called “Bun Long”) is best for taro chips; other types of taro don’t work as well. Choose a mature taro (not “baby taro”) which is a few inches wide (example, second example). This type of taro has purple fibers when cut crosswise.

Use a knife to cut off the skin from the taro. Discard the skin.

Use a mandoline or the slicer blade of a food processor to slice the taro into large paper-thin slices. The slices should be transparent, but not so thin that they crumple into a ball that is difficult to unfold. (I like to use the 1-2/3 mm setting on my Breville food processor; food processor settings may differ by brand or model.) The raw slices have a tendency to stick together; it is fine if the slices stick together as long as they are easy to separate.

Line a wire rack with paper towels. Pour at least 3 inches of high-heat oil into a large deep-sided heavy bottomed pot. The pot should not be more than a third to half full. Taro chips can be fried at anywhere between 260 F to 320 F. 260 F will produce very light-colored chips with almost no browning. The edges (but not the interior of the chip) will brown at 320 F, which I is what I prefer since it then the chips are three colors (brown edges, white interior with purple dots).  Heat oil to you chosen temperature between 260 F to 320 F.

Fry taro slices for about 2 minutes: Place a small batch of taro slices in the oil. It is okay if the slices are initially stuck together as long as they separate when you gently stir them with chopsticks. As soon as you put the slices in, bubbles will form and steam will rise; this is the moisture inside of the chips evaporating. Use chopsticks to gently push the slices around to help separate them; they will become easier to separate as they start to become cooked. The taro slices will start out floppy but as they cook they will stiffen. The taro chips need to be separated before they become fully stiff, otherwise they will meld together. Fry the chips for about 2 minutes, turning occasionally, or until they are stiff and the vigorous bubbles around them have subsided (which indicates that their moisture has released and they are crisp and cooked through). The taro chips won’t brown all over like regular potato chips; if you are cooking them at 320 F the edges might slightly brown, but if you are cooking them at a lower temperature they will be pale colored when fully cooked.

Immediately remove the chips from the oil with a spider or slotted spoon. Drain well and place on a wire rack to cook. Salt while still hot so that the salt sticks to them.

Variation: Toss the chips with salt and a pinch of mild smoked sweet (“dulce”) Spanish paprika or shichimi togarashi while the chips are still hot so that the spices stick.

Use a mandoline to slice the sweet potatoes or potatoes (Slicing on a slight diagonal gives a better angle for cutting the chips. Slice fingerling potatoes lengthwise for visually unusual, bigger chips). The slices should be paper-thin (i.e. as thin as possible but not so thin that the edges become uneven).

Pour at least 3 inches of high-heat oil into a large heavy bottomed pot. The pot should not be more than a third to half full. Heat oil to 325 F for sweet potatoes or 350 F for potatoes. Line a wire rack with paper towels.

Add a small handful of slices into the oil at a time. Use a spider or slotted spoon to separate the slices and turn occasionally. Fry slices for about 2-1/2 minutes or until golden brown;

Remove the chips from the oil with a spider or slotted spoon. Drain well and place on a wire rack to cook. Salt while still hot so that the salt sticks to them.

Variation: You can also flavor the chips. Many flavors are possible, for example a single drop of Tabasco on each sweet potato chip makes the chips have a nice spicy and vinegary flavor.