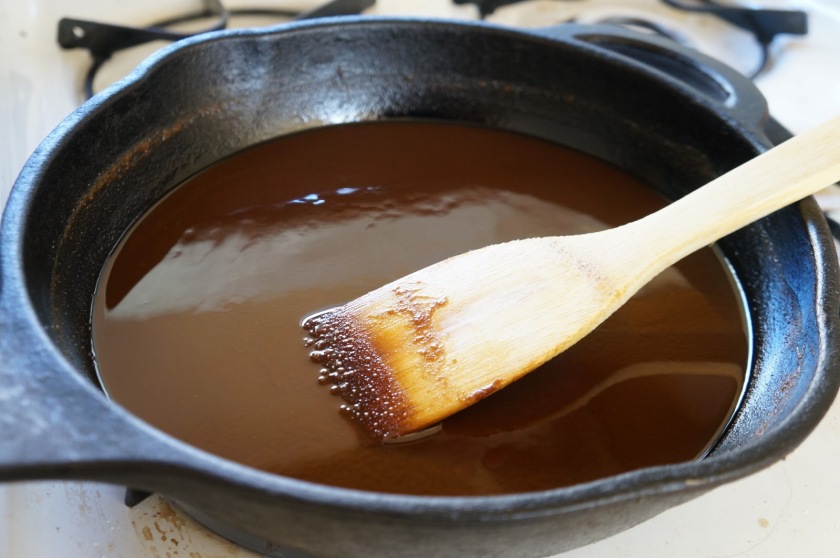 Roux is a mixture of fat and flour which is used to thicken gravy, sauces, and stews. The flour is mixed into hot fat and toasted until the raw flour taste disappears and the mixture is the desired color. There are several colors of roux that can be made: white, light brown (the color of honey), medium brown (a tan-brown leather color), dark red-brown (a mahogany color), and black. Many cuisines such as French, Italian, and Eastern European make roux but Cajun roux is unique because it is typically toasted until it is at least a deep brown color, which gives it a rich nutty flavor. Several colors of roux are used in Cajun cooking, such as medium brown, dark red-brown, and black*. Roux has less thickening power the more it is toasted; according to Wikipedia, a chocolate-colored roux has about one-fourth the thickening power by weight of a white-colored roux.

Most sources suggest cooking roux at a low heat for a long time, however Paul Prudhomme’s method uses very high heat to quickly cook the roux in 3 to 5 minutes. It is easy to burn the roux using Prudhomme’s method, so I suggest using fairly hot heat but not extremely hot heat and taking about 30 minutes to cook it. Adjust the heat as it cooks–start with a medium heat until the roux begins to brown (increase the heat if it take more than a few minutes for the first signs of browning to appear), and then lower the heat to cook it slower as it gets darker so that it is less likely to burn.

Source: Notes are compiled from a few sources including “Roux” from “Chef Paul Prudhomme’s Louisiana Kitchen” by Paul Prudhomme, “Brown Roux” from “Recipes: American cooking: Creole and Acadian” from the Time-Life “Foods of the world” series, Philipe LaMancusa from Kitchen Witch cookbook store in New Orleans, ChefBuenviaje.com, and Wikipedia.

Ingredients: Roux uses a 1 to 1 ratio of flour to fat. For example, 8 Tbsp of flour and 8 Tbsp oil (which will make about 11 Tbsp of roux). French and Italian cooking often use butter, but Cajun dark roux usually uses vegetable oils or other fats (such as animal fats, lard, bacon fat, or duck fat) with a higher smoking point than butter. I have used grapeseed so far, but peanut oil or lard is supposed to contribute good flavor (though peanut oil can be an allergen for people with peanut allergies).

Equipment: Use a clean heavy pan made out of cast iron or enameled cast iron, which preferably has flared sides to make stirring easier. Use a large enough skillet that the fat does not fill it by more than 1/4.** Don’t use a non-stick pan since non-stick pans shouldn’t be highly heated. Don’t use a thin metal pan since they encourage the roux to burn because they transmit the heat too well and they also cool faster (which is why they are good for sautéing, but not for roux). Use a spatula or long-handled cooking spoon to stir the roux since that will keep your hand far away from the roux.

Safety: Roux becomes extremely hot when it is cooking. Be very careful to not splatter it. If it splatters on you, the hot mixture will stick to your skin and burn. Don’t ever taste the roux while it is cooking because it will burn your tongue.

Method:
Heat up the pan on medium to medium-high. Add the oil. Wait 3 to 5 minutes for the oil to become hot; the oil should start to ripple and a light haze should form over it. Slowly sprinkle in the flour bit by bit and stir it in; don’t add all the flour at once. When you add the flour it may sizzle and steam since the flour has some water in it.

Keep stirring and scrape any flour that sticks to the bottom of the pan; do not stop stirring while you are making the roux because the roux will burn. Adjust the heat to control the browning process. If it is browning faster than you want it to, adjust the heat lower or move the pan away from the heat. It will take a long time to brown if the heat is too low–if so, you can turn up the heat a little. Keep stirring and scraping the bottom and sides of the pan. It will have a faintly nutty aroma when cooking. If black dots appear in the roux than it has burned and it should be discarded by transferring it to a heat proof container (e.g. Pyrex) to cool, and then thrown away. It should take about 30 minutes to make a roux the color of melted dark chocolate as shown above (the milk chocolate color seems to happen fairly quickly).

You can either use the roux immediately in a recipe or store it for later. I prefer making the night before so I’m not rushed.

Always mix hot liquid into the roux; cold liquid may cause the mixture to separate. There are two ways roux can be added to dishes: 1) You can gradually add ladlefuls of hot stock into hot or warm roux (with or without vegetables sautéed in roux); stir well after each addition of stock. 2) Or you can gradually add small spoonfuls of roux into stock, stirring until the roux is well dissolved after each addition–make sure that you add the roux in small amounts and stir really well, otherwise the roux will clump.

Alternative Method:
The traditional method is the best, but there is also an alternative method which doesn’t require constant stirring that Philipe told me about. He said that “To insure a well darkened roux, if you’re not going to stand over it and stir constantly, the best way is to put the pan (a heavy bottom pan like cast iron) in the oven at 375 and stir it every once in a while.” I haven’t tried it yet, but it sounds useful in certain situations.

* When I tried to make black colored roux, it came out burnt since it made particles that wouldn’t dissolve in warm liquid, so this is something I need to learn. Black roux is a lot harder to make than any of the brown colored roux.

** 8 Tbsp of flour and 8 Tbsp oil fit comfortably in my 10 inch cast iron skillet. It’s a good idea for a beginner to only make a small amount, so that it is less likely to splattering when stirring; 12 Tbsp of flour and 12 Tbsp of oil was the maximum I would do in this skillet for this reason. It is possible to make large amounts of roux at once if you use a large enough pot and carefully control the heat. I was able to make roux from 750 ml of oil using a cast iron dutch oven that was large enough for the oil to only fill it 1/4 of the way.